You’ve already seen in the initial setup how to place a Color Sprite into your scene, name it and give it a Custom Class of “Element”. Below is a quick reminder if you forgot though…

This article we’ll look at properties specific to Elements, which are the main building block of just about everything in the kit. Elements are really just images, or technically SKSpriteNodes, but by giving your image a custom class of “Element” you’re extending its capabilities so it can do more, for example, it might be a button.

Keep in mind, if you do not need to interact much with your sprite node, then you can lay out a simple Color Sprite in the Scene, give it a texture and be on your merry way.

One big difference between this kit and the original Story Tellers Kit is hopefully obvious to past users just by looking at the screenshot of the property list below. Notice how Puzzle1 has very few properties. That’s because a lot of the work is done by the Scene editor. Texture, size, rotation, z depth, location, blend mode, animation, physics properties, even Actions are initially taken care of by the Scene (oddly enough Alpha is one of the few you can’t set).  Making changes to an Element can be done via Events later on. Events can do things like set a new texture, move it, hide it, reveal it, apply a new SKAction to it (which could move it, scaled it, change it’s animated textures), etc. 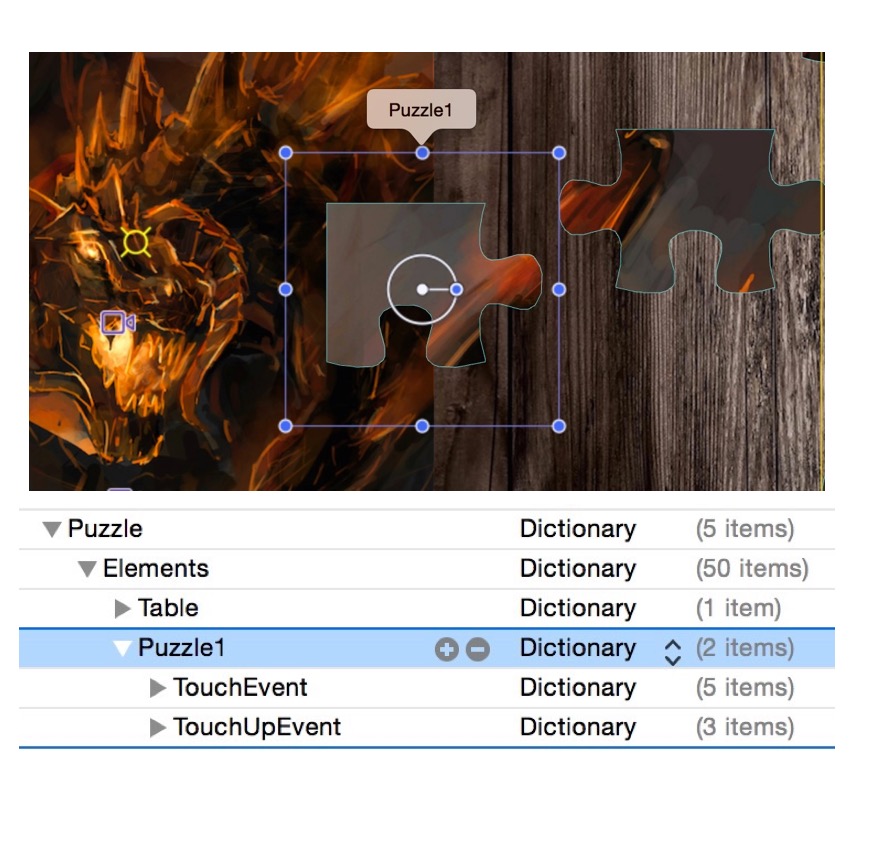 Point is, each of your dictionaries inside the Elements dictionary, will probably be relatively concise, and clutter-free.

As mentioned in Chapter 1, you can define an Elements dictionary on a per-page basis, or for commonly used elements in your Scene, you can also use the Elements dictionary in the Root. If both dictionaries had the same name, priority is given to the one for that particular page.

The Root Elements dictionary is intended for things like pause buttons, thumbnail images to jump to other pages, directional arrows to move character around, and other things that would potentially be used across multiple pages. 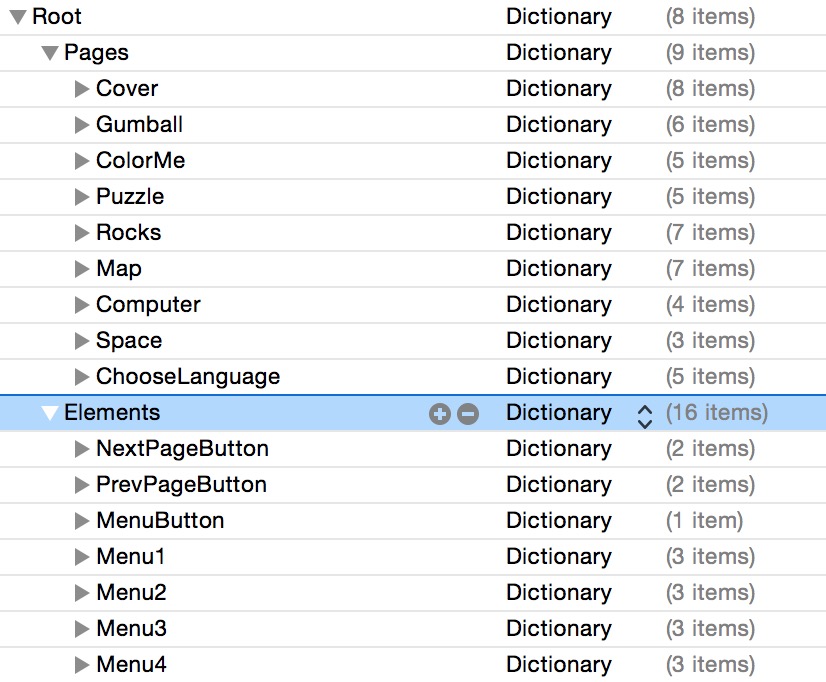 Some extra reading on reusing event keys on multiple nodes

The event has a key (Increment1) and single value (SomeNumber). If you wanted to increment multiple values, you could change the value type from String to Array….

You can include an unlimited number of items in the Array, all will be affected. And generally speaking, if a property in the kit can be a String value, it can be switched to an Array to apply the same event on multiple items.

Some events require a dictionary of their own to set the values needed. For example…

RunAction is the event. MoveUpAndDown and LongFadeOut are the actions to perform. And Ball and Notes are the nodes being affected by the actions. Notice in this example, LongFadeOut is also an array that is affecting the nodes.

Every element can have their own Actions array to automatically run actions (on themselves). If you want an element to immediately trigger an Action on another node, use the Events dictionary and one of the action-related events, like RunAction. Keep in mind, the Scene editor is usually the best place to setup Actions that will run automatically, but you can do it with the property list as well.

For a reminder on how to compose SKActions on the timeline, or how to create SKActions to use later with the property list, visit here.

Every element can have their own Events dictionary to automatically run events. We’ll detail those events in a lengthy dedicated article.  For the most part these are treated the same as other events, although if you want to act on the Element itself (the one running the Events), thats generally best done by setting the property directly in the Elements property list. For example, if you want to set a random texture, do that using the upcoming texture properties.

Read a little more on why this is

Technically what happens here is the entire Events dictionary gets passed up the food chain to the main page class and sorted there. But there’s really no reference inserted into it as to “who” passed it up. You could of course give a specific name in the dictionary equaling that of the Element passing along the dictionary, but in the case of randomly generated Elements (with identical names) this could potentially change all the same-named Elements.

Because SetValuesFromPool (and all SetValue-related code is run first), the event cycles through a new value from the pool, then uses that value for the texture. This would be a great way to cycle through things like clothing choices for a character in your book.

WillRotateWithGesture – A YES value will add the element to rotation array in the page (note the RotationControls dictionary must already be set in the page). This property is intended for nodes that get added at runtime (for example using a generator)

Setting up Physics on Elements

The Physics Definition window in the Scene editor has some cool features for making your Element (or SKSpriteNode) really come alive. To initially set a physics body, choose one from the Body Type pulldown. You can choose Bounding Rectangle, Bounding Circle or Alpha Mask.

Most likely you’ll want to use Alpha Mask because this sets the physics body to the actual shape of your image. For example if it was a star, the body would be a 5-pointed star. You can see the blue outline of the star’s physics body in the image below  (ignore the purple rectangle used to resize the object). Keep in mind, these are bodies and just like in real life other objects can’t exist within another body.

To detect when one physics body has contacted any other physics body you’ll start by setting the Category Mask property (see the top green circle in the image). 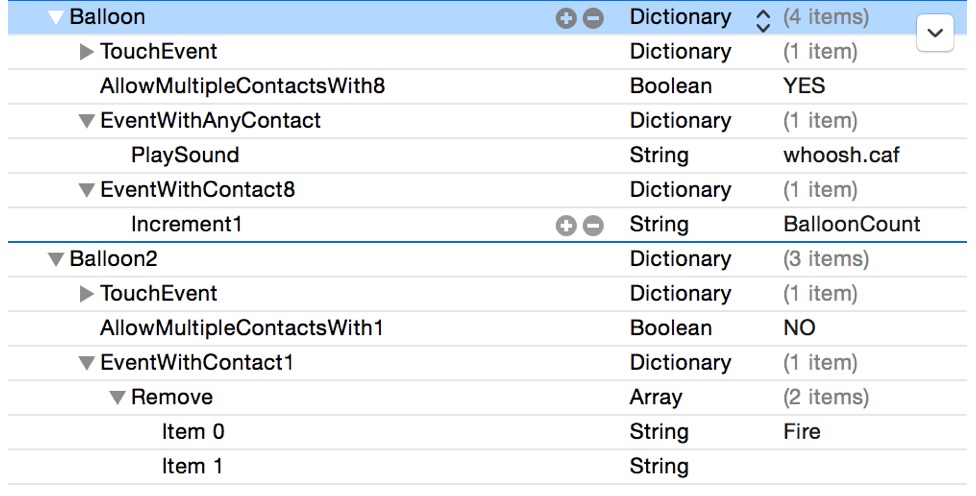 Note that an Element can detect contact with multiple categories. For example, Balloon2, Balloon3, and Balloon4, might each have different Category Masks, but as long as each of them sets 1 for their Contact Mask, then Balloon can react differently to each one.

IsCage – A Bool value set to YES will make the Element into a rectangular cage essentially. Objects can exist within it. The buggy part of this is where the body is in relation to the actual shape. Hopefully resolved by Xcode 7’s release.

Where to go next…

There’s plenty more Elements are capable of but most of that is done through Events, and other properties like Event Listeners, Generators, etc.