Bring in your own tile art (or use some of what we’ve provided) and start painting away. Make lush worlds in almost no time!

Drag and drop your art in, then design your levels visually ALL within Xcode’s amazingly easy-to-use Scene Editor. You can even animate and preview all without even building your app!

The Property List is the core driving force behind all of our kits. Be as creative as you want! Make unlimited levels, unlimited objects, inventory, enemies, whatever. It’s all done through here.

Don’t call it a “template”, you’ll hurt our feelings…

We do not make templates here at CartoonSmart. Every app created from one of our kits should look, play and sound completely different from another app built using it. Just like every app started from Xcode’s starting SpriteKit project is unique. Our kits are starting points to something only you can imagine. And just like SpriteKit makes every game developer’s life a little easier (for example, by not having to write our own physics engine), our kits make things even easier still by providing simple common-sense properties to work the existing code for you. Before you get started with one of our kits, think about how you’ll make a quality, unique app that your end-users have never seen before. Simply modifying our demo version is not an option! 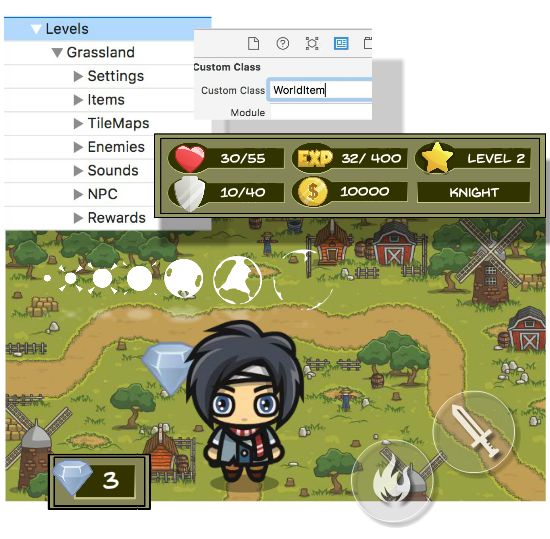 Made for Top Down Worlds!

This is our first kit made specifically for top-down viewed levels. Players, NPC’s and enemies can all have 4-directional animations. So for example,  enemies can have 4 sets of animated sequences for projectile-thrown attacks, based on whether they are facing front, backwards, left or right. Including all 4 directions is optional though!

Design and Animate in Xcode

Like our other Swift-based kits, we make full use of Xcode’s amazing Scene Editor, which enables you to visually layout your level, and even animate it. For example, you could quickly drop in a mine cart, and animate it rolling back and forth. All without ever having to use the property list (or code). Xcode also allows you to save animated sequences, for use later. This makes the property list a perfect companion to the Scene Editor. For example to specify an enemy’s backward walk cycle, we would just note it in the property list as something like, “TrollWalkBack” and save that sequence using the Scene Editor.

Watch a video on how save actions...

XP, Inventory, Rewards – All up to you!

One of the classic “hooks” of a role playing game is how a player advances over time with experience points, or XP for short. The RPG Kit fully embraces this and gives you unlimited rewards via XP. So for example, after the player kills 10 enemies, each rewarding 10 XP, they could meet a goal of 100 XP, and advance to the next level (or bracket of XP). At which point, you can reward the player for advancing with ANYTHING you want. Currency, health, armor, new weapons, an entirely new look, increased player stats, or some inventory item of YOUR choosing.

Another staple of every good role playing game is finding out useful (and sometimes useless) information from Non-Player Characters, or NPC’s for short. Like everything, the kit makes this incredible easy, and supports NPC’s that can walk randomly in 4 directions.  When the player contacts one, they stop to talk. NPC’s can have an unlimited amount of random dialogue to initially tell the character, plus an unlimited amount of reminder dialogue. So the second time the player talks to the same NPC, they could read something like “Hey, did you ever find that key for the cave”

Now that Xcode supports tile maps, it is incredibly easy to “paint” your levels. You’ll import in squares of your level art (for example, a 128 by 128 PNG file), then build up a collection of art for that level. For example, all your farm-style tiles would be together. Then in Xcode’s Scene Editor, you simply drop in a new SKTileMapNode and begin filling in the tiles onto the grid. You can even leave tiles blank and create a maze scene. Then via the property list, you can specify that you want the tiles to have a physics body, so the character would only be able to walk through the non-tiled part.  Tile maps can also scroll parallax-style, so you can layer your level with multiple tile map grids.

Watch a video on how to get started with tile maps...

Like all good RPG’s, the kit supports player upgrades. In the property list, you’ll define the various properties for each Class of the player. For example, the player might start as a Peasant class and work his way up to a Knight. Each Class can have completely different properties, which means everything from weapons, to stats, to animations can be upgraded. Class changes can be triggered at the start of a level, as a found reward (like finding a new suit), through experience points, or by killing enemies.

Enemies in the Kit fully support 4-directional art, or none at all. They can be as simple a spike popping up from the ground. Or they can look and attack exactly like the player, meaning they have 4 directions of animated artwork and can do ranged (thrown) attacks or short-range, melee attacks. Enemies can be idle until the player moves within a certain range, thus triggering them to move. And enemies can have three types of movements: totally random, follow the player, or any kind of saved action you want to setup. You can even create lists of saved actions, so the enemy performs a lengthy pattern of movements. Enemies have a ton more options, too many to go into great detail here.

Watch a short video on how to setup a simple enemy...

Unlockable Items, of any kind you want!

Items in the kit can be anything you want. You can use them as portals to other levels, they can reward the player, give the player info, play sounds, remember if they’ve been opened before (great for treasure chests), require certain things to become open (like a key), or be time-sensitive where the player must stay in contact long enough for it to open. And like everything else, items can be animated, for example a spinning coin.

Watch a video on how to setup an item...

Watch a short video on how to customize the GUI...

Both players and enemies can attack using short-range, melee style or by throwing projectiles. A player’s melee attack is determined by their current Class (which can change whenever), but a ranged attack can be changed as often as the player picks up different projectiles in the level, or is rewarded with different projectiles. These weapons can also be set to run out of ammo, or be unlimited. Players can get new projectile weapons by gaining XP, entering new levels, defeating enemies or opening items like treasure chests.

Watch a short video on how to setup or change projectiles

With a few simple properties you can set up buttons to purchase access to any number of In-App Products. Once purchased your buttons can be used to enter the game at specific levels. So you could create a game map, with a mix of jump points to specific levels and levels that require purchase. Level-select buttons can also be restricted to whether or not the player has already reached that point in the game.  If a player enters a level that requires a purchase, for example, portals to a new level they haven’t bought access to, you can automatically send them to a menu with your purchase buttons.

Watch a short video on how to setup In-App Purchasing

Connect your bluetooth Nimbus or other external game controller and starting controlling your RPG character right away. Use the directional pad or thumb-pad joysticks to move, X to throw projectiles, A to melee attack and Y to change weapons. If your controller has shoulder/trigger buttons those will also attack. As you can imagine, tvOS apps get WAY more downloads if they support external controllers.

Apps Made with the RPG Kit

Congrats to Ervan for his recent app made with our kit. He took less of an exploration-game approach and made a battle arena /escape game. Great idea! Here’s what he says about his app….“Race against the clock to the exit levels by crossing vacant honeycomb sections and avoid scatter guards. Unlike other escape games, Badbee is full of surprises and extremely addictive!”

BadBee - Made with Our Kit!

People often ask us if there is a CartoonSmart published-app in the Store using this kit, and there’s not. We’d love to do an especially tongue-in-cheek, “meta” role playing game, but we’ve been way too busy learning and training to fully see that through. We don’t submit demos to the store for the sake of just showing off our kits. If we publish an app, it’s going to be a real app, and a good RPG takes time!