Build a Side Scroller in Xcode

without EVER writing a line of code!

Build a Side Scroller...

Without ever writing a line of code!

Watch more of the kit in action!

Quickly Create 1 or 2 Player Games for the new Apple TV, iPhone and iPad!

The Platform Games tvOS and iOS Starter Kit is capable of creating side scrolling apps that are only limited by your own imagination. Yet, the kit is so simple to use, you’ll be able to make an entire app in a weekend.

Run your kit-based apps on the new Apple TV, iPhone or iPad, and connect an external game controller to start playing your game right away. The kit also supports high score boards for Game Center, and as usual with our starter kits, everything is property list based. So you’ll never need to edit the actual code (unless you want to).

Check out our apps, Horde 1 (free) and Horde 2 (free), made using the kit.
This art is not included with the kit.

Don’t call it a template. Cuz it ain’t!

We do not make templates here at CartoonSmart. Every app created from one of our kits should look, play and sound completely different from another app built using it. Just like every app started from Xcode’s starting SpriteKit project is unique. Our kits are starting points to something only you can imagine. And just like SpriteKit makes every game developer’s life a little easier (for example, by not having to write our own physics engine), our kits make things even easier still by providing simple common-sense properties to work the existing code for you. Before you get started with one of our kits, think about how you’ll make a quality, unique app that your end-users have never seen before. Simply modifying our demo version is not an option!

The Platform Games kit can easily pay for itself…

Or a year’s subscription to CartoonSmart (which includes the latest version of the kit), in very short amount of time. Take a look at what a relatively low number of $1.99 app sales can add up to…

Design and Animate Levels within Xcode!

Xcode’s amazing Scene Editor allows you to completely design AND animate levels. So if you want a shredding saw to chop players in half, you can rotate and move it using the Scene Editors timeline. Animations can be looped, making it the perfect solution for level animations.

The scene can also simulate many physics interactions without ever having to build the app. So arrange an Ammo Drop for a player and see where it will ultimately end up.

Plus for the release of Xcode 8, we’ve added collide-able Tile Map support, so designing levels is even easier! 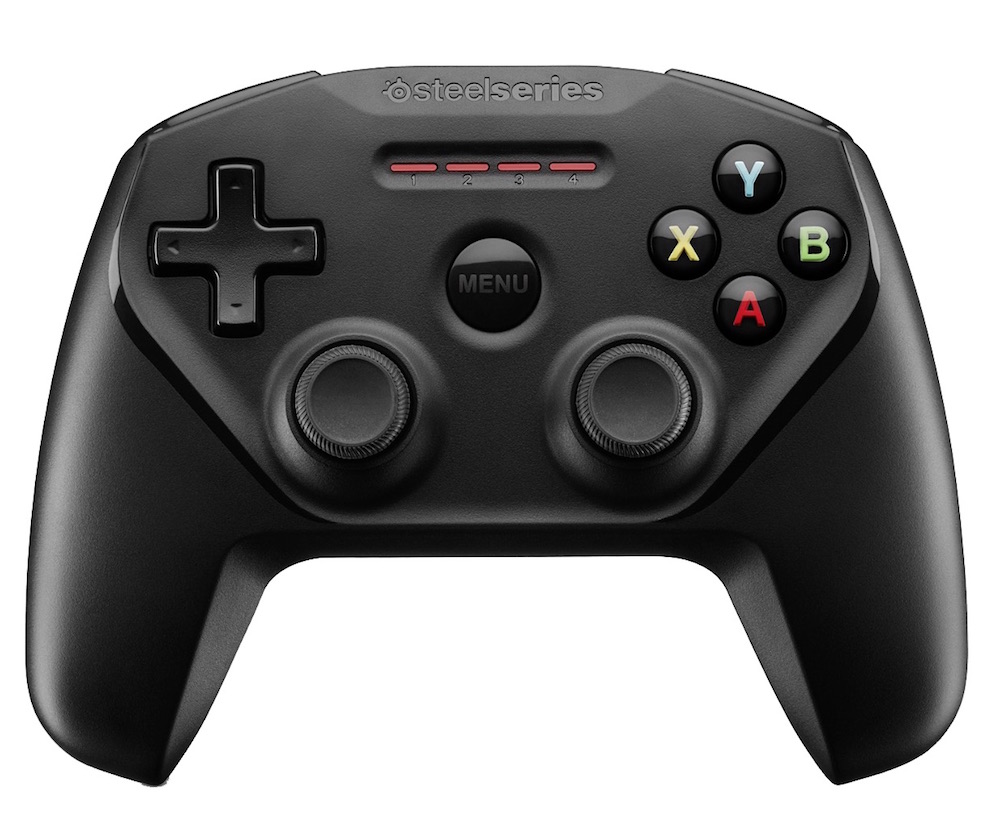 Touching your device to play games is sooooo, 2014. With the new Apple TV helping to push customers to up their gameplay with the Nimbus controller (to the left), you might notice some resurgence in iOS platform games as well. Prop up your iPad or iPhone someplace closeby, kick back and play the iOS version of your app using any supported external game controller. They’ve been on the market for years, the Nimbus is just an Apple-endorsed controller (and a really good one).

But the controller is really about TV. It makes such a huge difference. For customers obviously, but developing with it, you might feel like the 10 year old version of yourself is proud to see you making a game for a giant TV with a controller. That was the ultimate dream growing up right?

Battle your friends head-to-head by connecting two external controllers, or with the new Apple TV, a single external controller and the included remote (turn it sideways for a more natural feel). Versus mode pits player against player, each with 4 life icons, and the first to lose them all loses the round. The level will then advance to the next “arena”.

You can also create levels where players work together to pass the board by finding the exits, by combining scores to exceed a certain amount, or by killing enough enemies. In co-op mode, deceased players can be revived at the start of the next level or not at all. 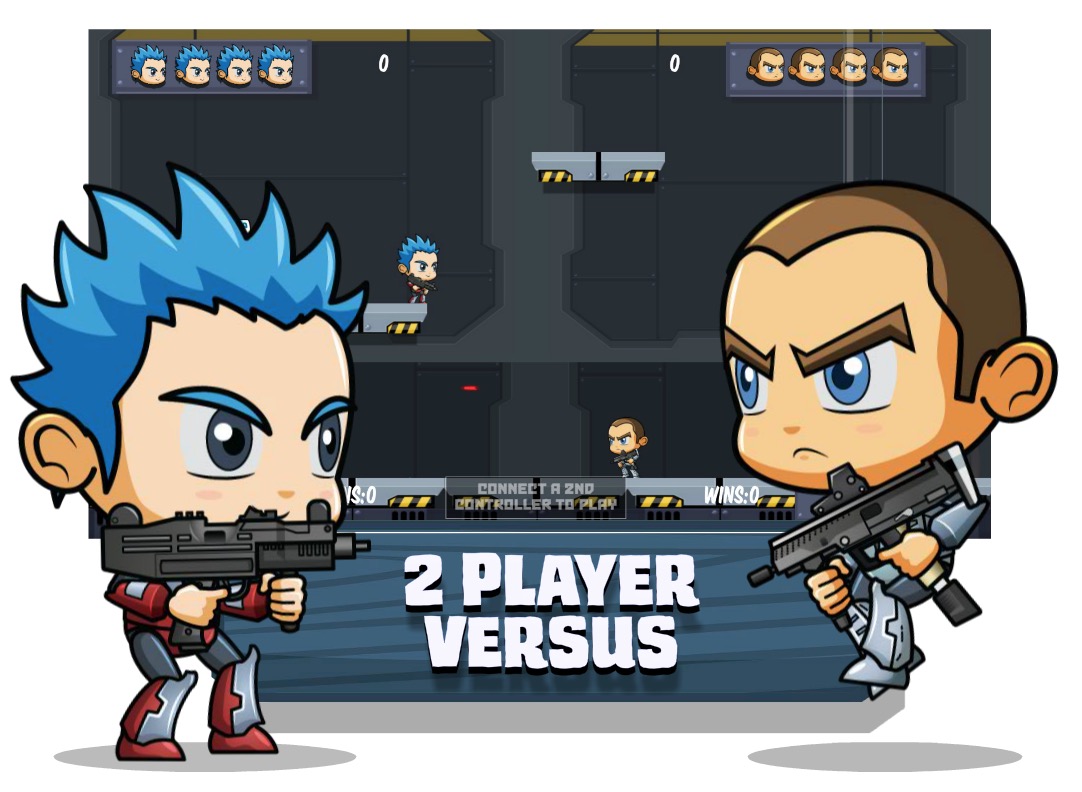 No Coding Needed. Ever. Seriously. 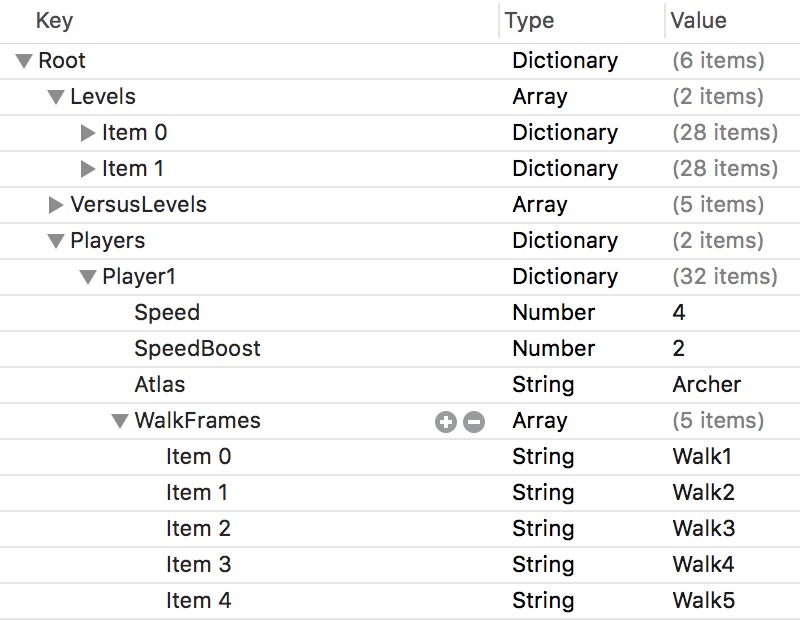 We teach code here at CartoonSmart. We love code. But part of making a great game engine, means it can be used without jumping in and out of the code constantly. This lets you, the developer,  focus on just adding great art and designing fun levels.

If you’ve never worked with a Property-List driven project before, the image to the left shows you what to expect. Very literal property names provide data for each level. You can copy and paste these so each level uses the same data as before, and most properties are already setup in the demo version of the kit. Think of the property list like a control board for the app. Flip a YES to NO, and the level does something. Change a number, and the character might run faster. The property list is really just a pretty version of the default values in the code itself. But it can make each level flexible to changes that aren’t hard-coded into the base class.

Design levels once for both tvOS and iOS

No one likes to start over from scratch just to support another device. The kit is designed in such a way that you can create a single 1920 by 1080 scene, and use 1x images for tvOS and iOS (the iPhone 6 Plus is a 1920 by 1080 screen space when using 3x images, the same size as a tvOS app). So once you’ve created your Sprite Kit scene levels for one device, they are ready for another.

Multiple menus to go anywhere in your game…

Don’t leave players jones-ing to replay a particular level with nowhere to go. Create as many supplemental menu screens as you want, and link to every level, level “sections”, secret levels, wherever! Buttons can be disabled to prevent players from jumping to levels they haven’t yet made it to.

Menu buttons can also open Game Center, so players can check in on who the worlds greatest [ enter your app name here ]  player is.

Sell your apps as a Universal Purchase

Give potential buyers more reasons than ever to get your app.  The Platform Games Starter Kit enables you to publish to both tvOS and iOS, then sell your apps under a single listing in iTunes Connect (making it a Universal Purchase). Or you can create tvOS-only versions and iOS only versions. It’s up to you!

The Kit also includes some art assets to give you a great sense of how to use your own art in production.

We’ve added a fun new, retro style version of the kit to explore. This is a surprisingly addictive little game that plays a bit like Donkey Kong and the original (non-Super) Mario Bros. So now CartoonSmart Subscribers get our original art-filled version of the kit, plus this new version, with relatively few art assets included.  And if you play this game with an external controller, you’ll spot one of our favorite new features: bullets that can be aimed up or down using the Right Thumbstick of the controller.