The Player1 and Player2 sub-dictionaries (inside the Players dictionary)  have a lot of properties so you can create the perfect player for your game. Let’s take a quick look at an example… 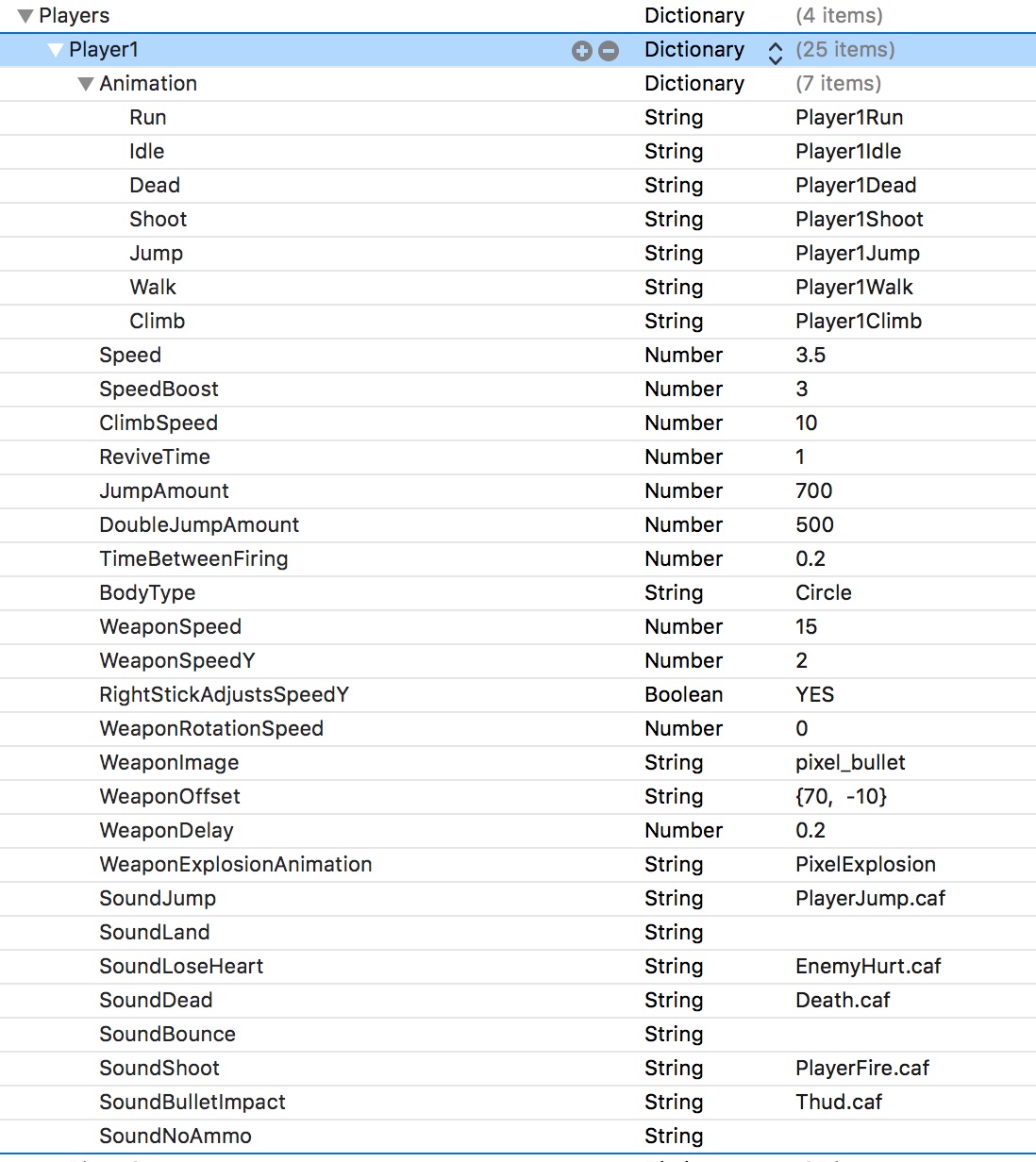 Where to Add a Players Dictionary

You do not need to add a Players dictionary on every level, but you can. So notice in the example below, there are two circled Players dictionaries. One is within Item 1 inside the Levels dictionary, and the other is in the Root of the property list…. 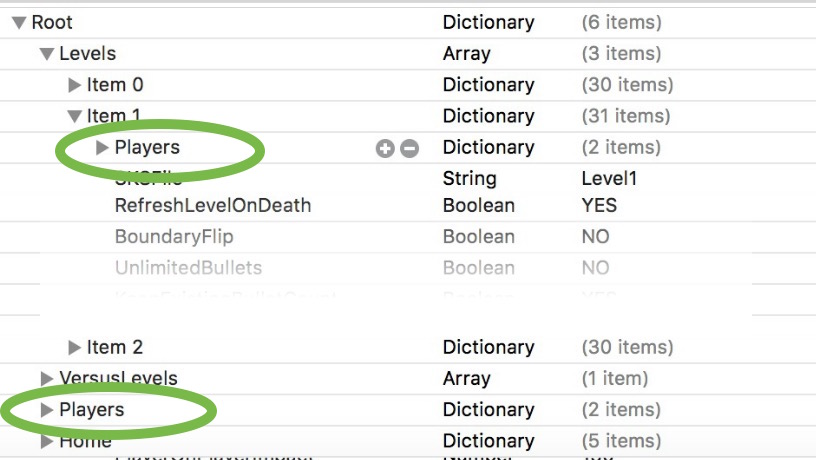 In this example the second level of the game (which is Item 1) will find the Players dictionary for this particular level and use that information to define the player’s data (which is everything about the player: their bullets, physics, sounds, animation, etc). If the level does not find the Players dictionary here, it will revert to looking for one in the Root of the property list.

You do not need to setup a physics body for your players in the scene file. By default players have a circular physics body setup by the code in the Player.swift class.  In the property list, you can change this to a rectangular physics body or one based on the alpha data in the base image of your player. You can see the physics of your players (and every other object in your game) by finding the GameViewController.swift file and changing showsPhysics from false to true.

Here are all the physics properties for the players…

Animation is completely optional with the kit. If you want to include animated frames for the player idling, walking, running, shooting, jumping, dying or climbing, you’ll do so by creating an atlas folder with all the animated frames, then importing that to the kit. You can make an atlas folder, by simply creating a folder on your desktop or anywhere else on your Mac, then adding “.atlas” to the end of the folder name. Add your frames to this folder now. You can then drag and drop it into Xcode. Anytime you add assets to the kit that will be used for both iOS and tvOS, be sure the following options are toggled on… 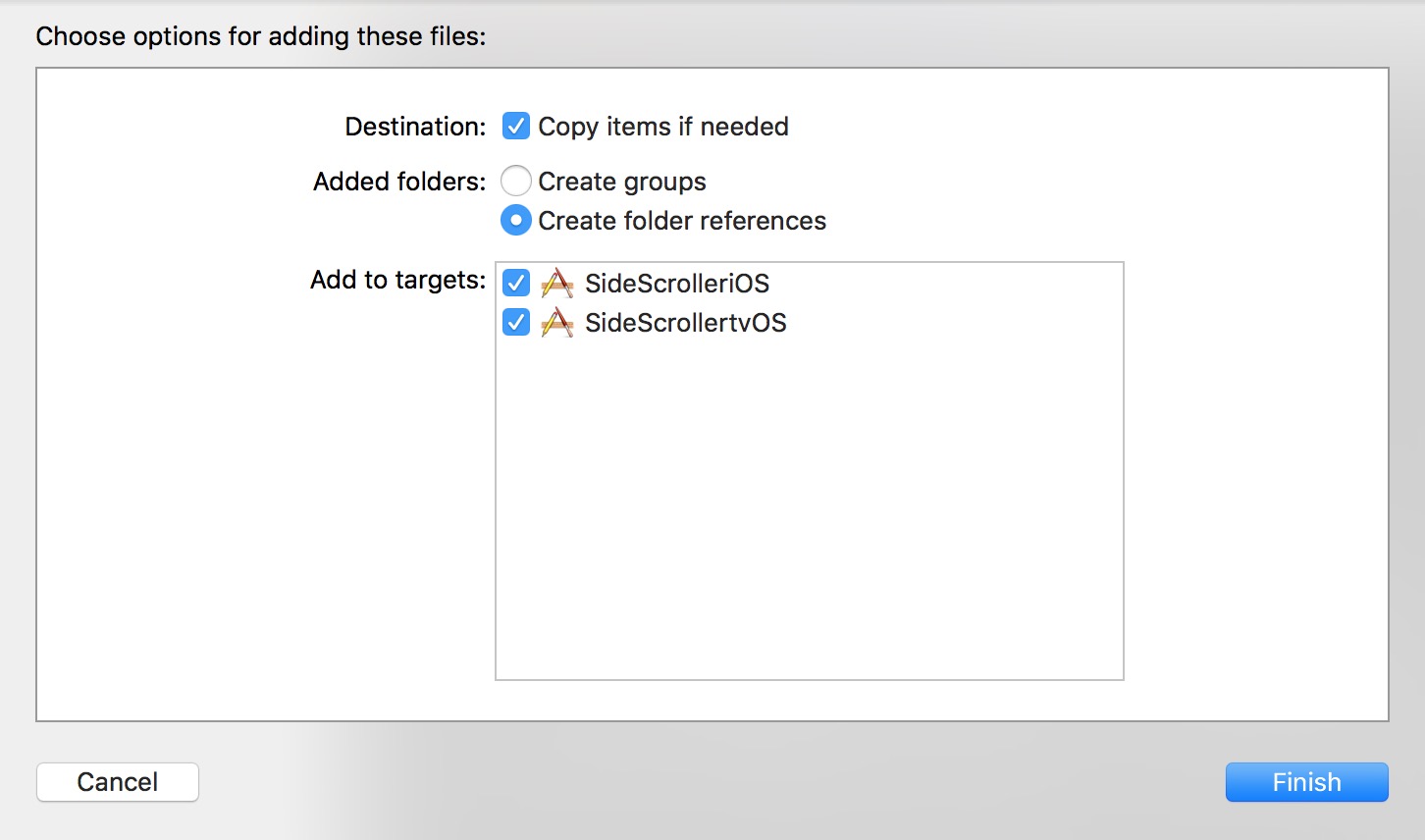 You always want Copy items if needed toggled on, and Add to Targets should always be checked (if not, your art won’t be added to the app binary). The middle option doesn’t really matter.

Atlases are convenient way to import sequences of images for a couple reasons. They are optimized by Xcode at runtime into a sprite sheet. And organizationally the .atlas folder is consider a single imported resources. So you can add or delete anything to the .atlas folder after importing it, and Xcode will recognize that files were modified. Which is easier than adding,  removing or changing large numbers of sequential images in the Game.xcassets catalog (which is traditionally where imported images go). 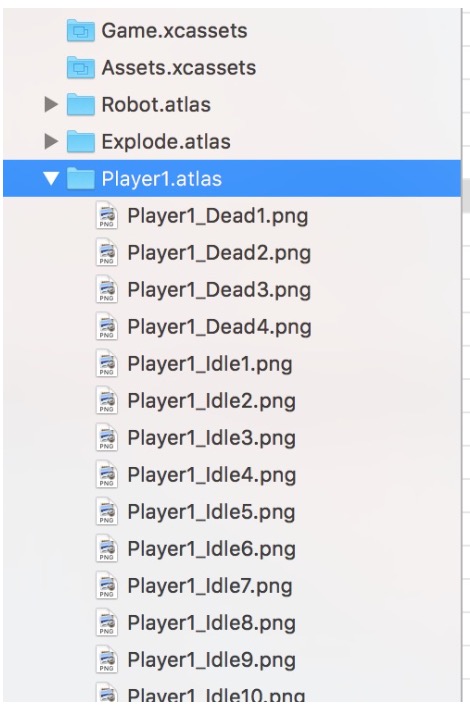 If you add more images to atlas folder than Xcode can optimize into a single sprite sheet, Xcode will tell you the files have been split into 2 or more sheets (if so, just ignore that warning).

Important: All frames should be Right-Facing, meaning the character is facing the right.

Once you’ve imported your .atlas folders, open the Actions.sks file… 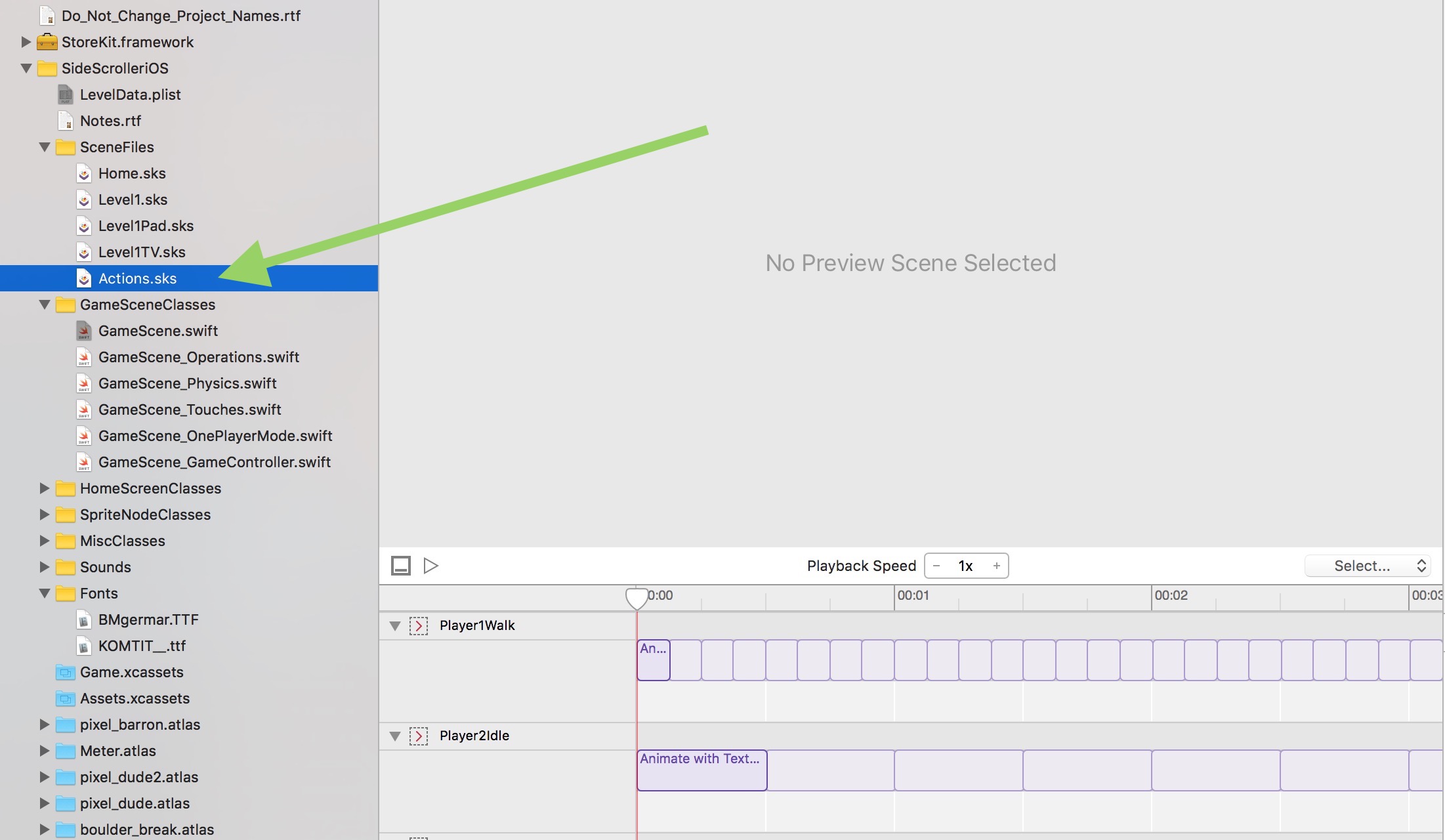 This SKS file is used for saving actions to be used later in the game, in particular our character animations. To create a new action, tap the + sign (see where the arrow is point below)… 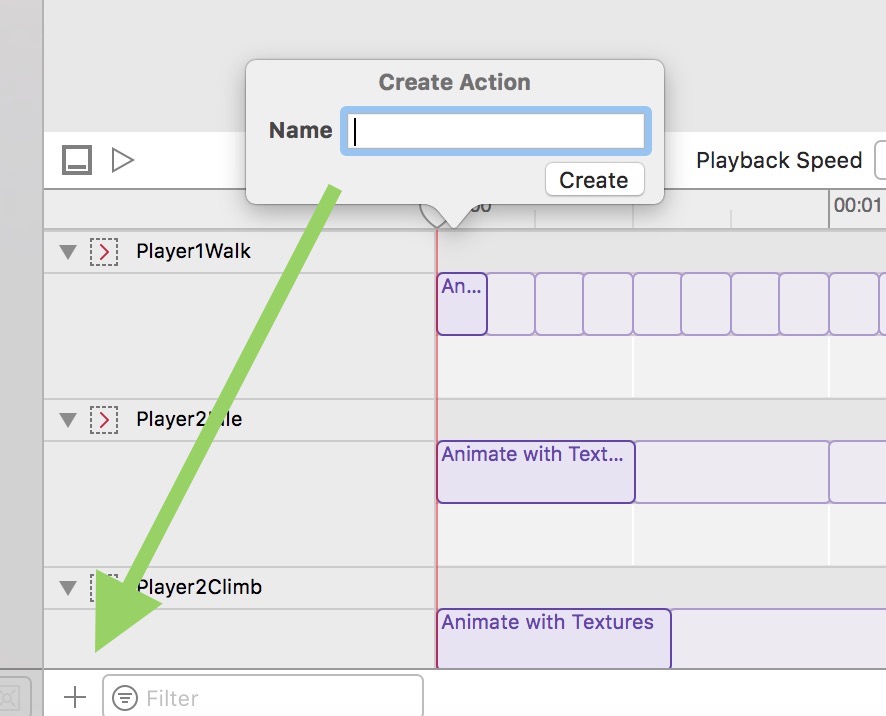 Now name the action (this name is what will be used in the property list later).

Next, go to the Object Library (pointed to in the image below) and find Animate with Textures.

Drag this to the timeline under the new action you just created.

Now you can switch over to the Media Library tab (pointed to in the image below) and drag images from there, into the Textures section of your Animate with Textures action. 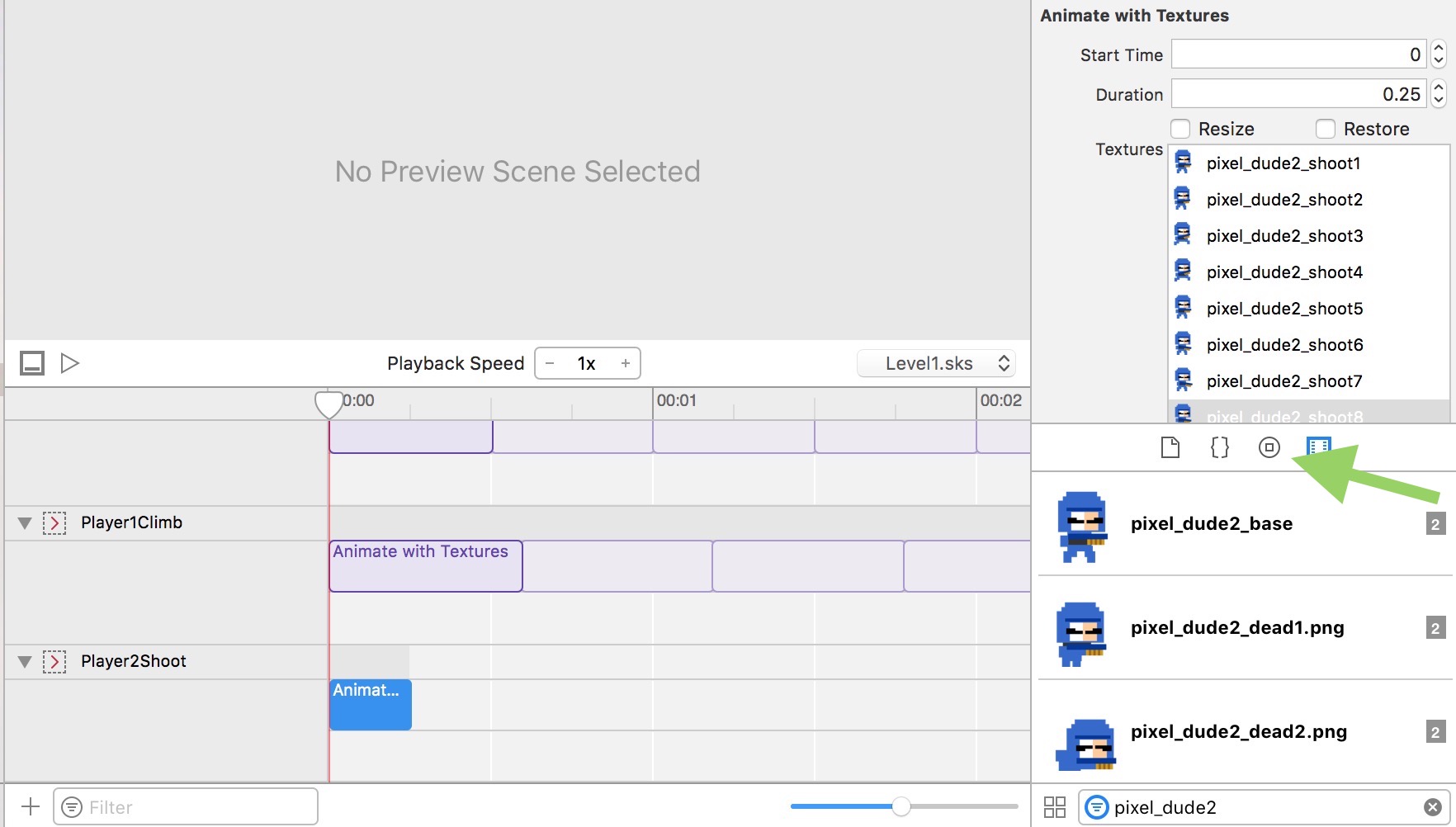 Finally, we can head back to the Property List and enter the action name into the Animation dictionary.

You can include the following options in the Animation dictionary …

Players define the look and properties for their weapons. You can think of weapons as any kind of projectile: small axes, throwing stars, lasers, hamburgers, etc. 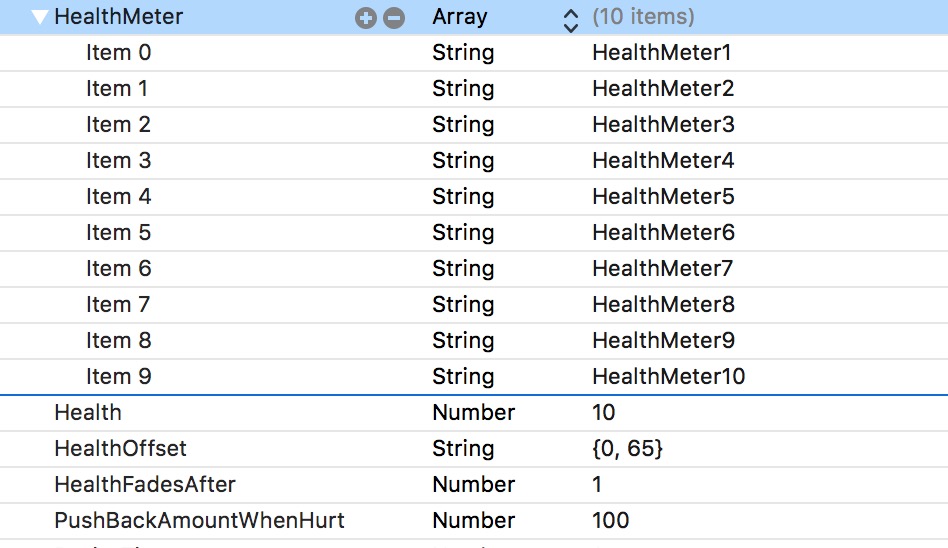 Players define their own sounds using the following properties.