Every CartoonSmart Starter Kit has a feature that we think really raises the bar, in terms of what you can do with the kit. In the Story Teller’s Kit 2, this was a featured named Event Listeners, which allowed you to listen for all kinds of variables basically, and respond to them, In the Platform Games Kit,  just being able to design worlds almost entirely within Xcode (and with very few properties) then play them with external game controllers, checked off some bucket-list goal from when I was a 10 year old playing the original NES. Goals in this kit are really what sets it apart from just being a template to move around art and have stuff collide on the table. Goals are how you are going to craft a pinball game that players are addicted to.

Take for example, a ramp.  By itself, it’s a fun device to send the ball up through. The ball sails over other objects it would normally collide with and land elsewhere on the table.  But when the player realizes they have to send the ball up that same ramp, 8 or 10 times, suddenly it becomes a mission. And if that mission has to be restarted when the ball is lost, players become committed to keeping the ball in play. This is the crux of any good pinball table. People need something to work toward to keep them invested.

You can see in the image below, our Old West Table has plenty of Goals, some with obscure names, some that might give you an idea of their purpose just by reading the name (like ExtraBall). Point is, you get to design these goals yourself, and the kit supports an unlimited number of them. So don’t think you are constrained by our suggestions, or existing names. 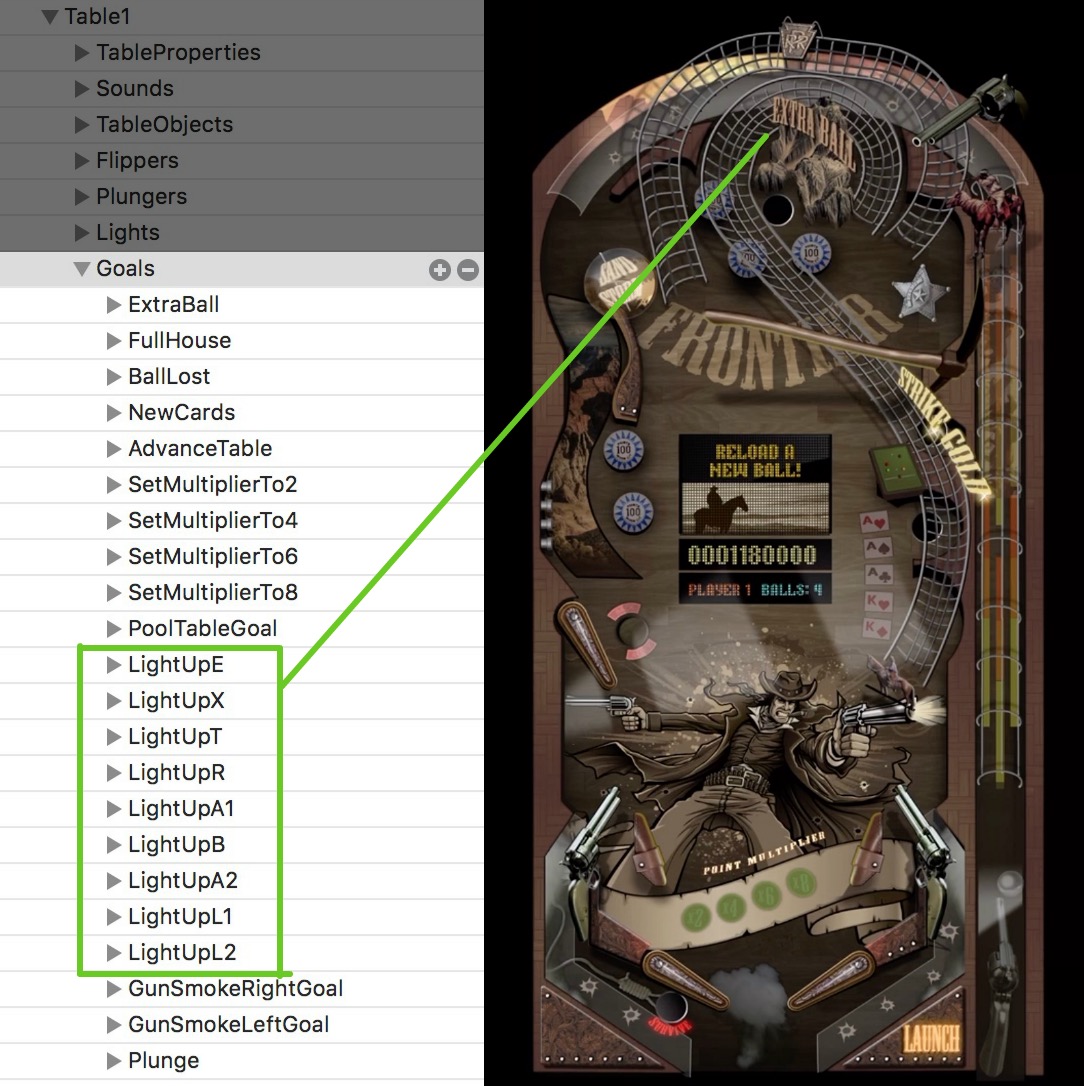 In the green box in the screenshot above, you can see the Goals used to light up the letters E-X-T-R-A  B-A-L-L (and ultimately award an extra ball). One letter is lit each time the player’s ball goes over the ramp. Not seen in the image, there is a Light, named ExtraBallTrigger around the upper curve of the ramp,  which increments each goal every time the ball contacts it.

In the left image below, you can see the AddsToGoal property for the hidden ExtraBallTrigger on the ramp.   On the right, two of the Goals are unfolded: LightUpE and LightUpX. Notice the AchievedAt values are 1 and 2 (circled in green).

Every letter spelling E-X-T-R-A  B-A-L-L has a higher AchievedAt value than the previous letter. When the final goal,  LightUpL2 (the second L) has been achieved, an extra ball is awarded using the AddBall property (circle below). Notice the AchievedAt value is 9,  so at that point, the ball would have rolled over the ExtraBallTrigger 9 times.

Obviously the goal has other properties, all of which we will discuss in this article.

What Can Add To Goals?

Setting the AddsToGoal property in any of your TableObject or Light dictionaries is normally how you will increment goals.  The kit also has a few other places to add to goals.  In the TableSettings dictionary, you can add the properties…

You can also add to a goal every time the Plunger is used. In this case, the AddsToGoal property is set for a specific plunger….

Keep in mind, since the plunger can be used multiple times in a row (if the ball doesn’t escape the plunger alley), this could potentially run many times per round. So most likely, you will only want to use this goal for minor events, like playing sounds or animations.

How badly do you want to understand what happens technically with goals???

Swift coders only from this point on… NSNotifications and  NSUserDefaults are the backbone of the goal system.  A notification is sent to the GameScene (normally from a Light or TableObject) with the name of the goal to increment up. In the screenshot below you can see the function that receives the posted notification. The notification parameter contains the “goalName” as part of the userInfo.  So for example, a goal named “ExtraBall” might be pulled from this userInfo…

We then create an integer variable named currentGoalAmount that is equal to what the NSUserDefaults has saved for a key matching that goal name, in this example, that key name would be “ExtraBall”

The defaults then sets the same key to a new integer value of currentGoalAmount + 1.

And finally a much longer function named addToGoalWithName is called to check the Goals dictionary for that goal name and see if its AchievedAt value is equal to what the defaults has saved for it.

Point is, a capable coder could easily create their own goal properties and check for them in the addToGoalWithName function or any other function that checks the value of defaults.integerForKey ( “[whatever the goal name is]”  )

Also covered in detail in the Pinball Games tutorials

Resetting or Adding / Subtracting Other Goals

Goals Related to the Ball or Other Nodes

You can place all sorts of physics fields into the scene by dragging them from the Object Library onto your table. These can have some WILD effects on the ball or other non-dynamic objects. You can see some of the fields listed below… 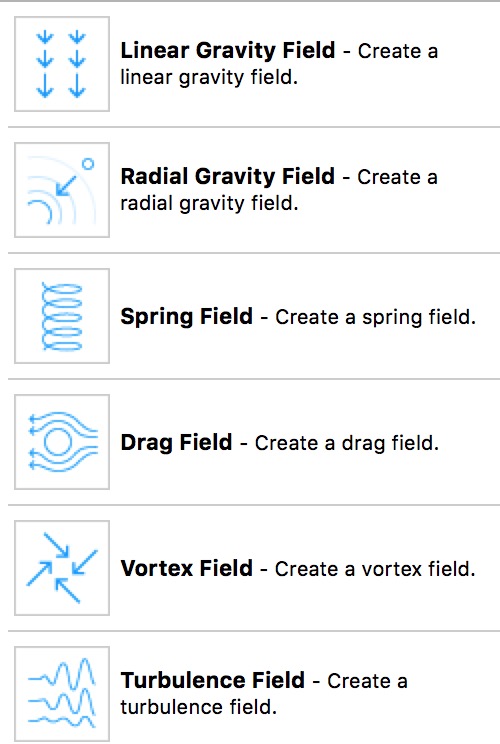 To make a field have an effect on the ball or another physics based object, you need to set the CategoryMask of the Field to match the Field Mask of the object. To keep things simple, just use 1. The MainBall and ExtraBalls in the kit already have 1 set.

Any fields you want to be temporarily activated by a goal should have their Strength set to 0, so the field is turned off initially.  The goal will then set the Strength to 1, for as many seconds as specified in the value. For example, the ActivateTurbulence goal below uses the property TurnOnTurbulenceFieldFor activate a field named TurbulenceField for 5 seconds….

The properties below all function the same way, by temporarily turning the strength of the field to 1 for a set number of seconds.