After wrapping up Session 7 in our series of Swift and Sprite Kit Pinball tutorials, I can tell those of you students following right along with me, that we are close to the end! A couple more sessions should do it.  But I don’t want it to be “The End”. I’ve enjoyed teaching these lessons so much, I don’t want to stop.  I tend to fall in and out of love with projects and I’m 100% back to lovin’ on pinball. Pinball as a project, but also just the game of Pinball, and what it is that makes it so much fun to play. Outside of the tutorials, I’ve been testing the code in a remake of a pinball game I did back in my Cocos2d days (seen below with the physics turned on and off). And now that I’m testing different types of goals / objectives in the game, I have to actually play the game like a user would, meaning I have to keep the ball in play long enough to make it go up a ramp 5 times, or hit enough side buttons to activate a 2x, 4x, 6x, then 8x multiplier. Or make that one impossible shot that you usually only make once in 5 minutes of gameplay. And that’s what is so fun about pinball: it is a relatively small world but one that never feels the same twice. 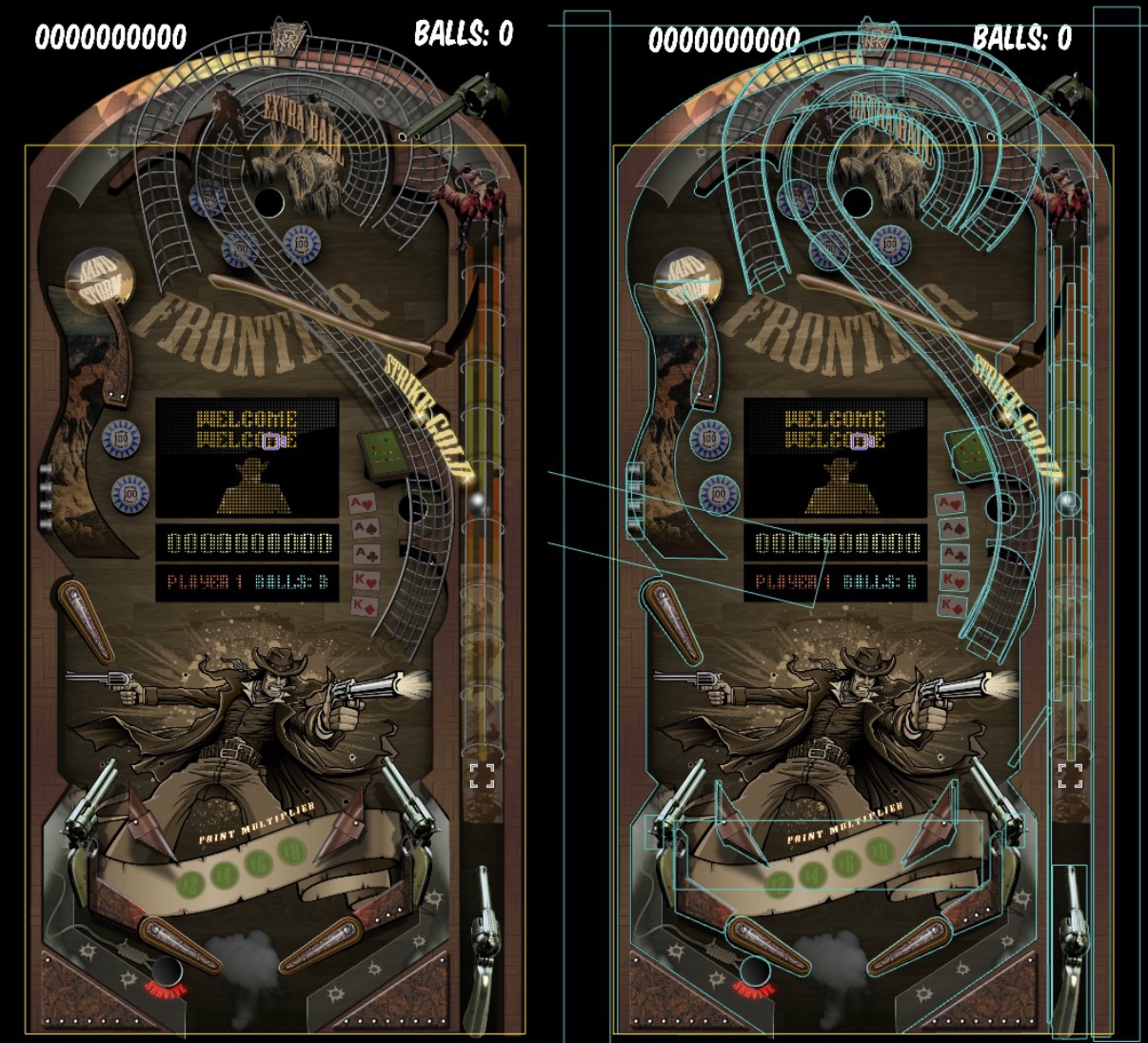 Game makers love to brag about the number of possible ways their game can be played. For example, Cards Against Humanity has like a bazillion different ways to make an answer. Pinball is the ultimate re-playable game. Almost as soon as that ball enters the table, there’s an infinite number of ways the game can go. Which is ironic because the table itself is relatively small playing field, as far as games go. For example, you could spend as much time creating a pinball table (that takes up about as much screen space as an iPhone), as you would to build a single level in a platform game that spans 50 times the length.

Which is really the main point of this article. With the tutorials wrapping up soon, and our fully polished Pinball Starter Kit to come, you can really start to think about what’s possible for you within your limited amount of time to make an app. I know many of you aren’t full-time game developers. And if you are, you’re probably working for someone else and don’t have the luxury to just make any game you want. So we all have to work within the constraints of our lives, and pick and choose our “hobby apps”  based on some important factors…

Am I right? I’m sure most of you have considered those factors when thinking about what type app to make. To me a pinball game satisfies all those bullet points.

Timewise, I know how long it takes to design a pinball table and its not that long. I would measure that time in TV hours because it’s clearly “TV work”. Prime time TV is a fancy radio to me that occasionally warrants looking at with my eyeballs. Which is why I insist to my wife that the volume be a certain level, because I’m participating in a show at half the sensory level she is. So anyway, I know I can knock out the design of a table in a few nights of non-“actual work”-work hours. Fun work. And integrating the art into the actual project has become easy with Xcode 7 (drop it in and toggle a few properties). That part takes FAR less time then designing it. And a fraction of the time it used to.

So lets consider the return on time invested. Well, as I just made clear, I consider TV-time like Life’s little bonus hours. And it can be free time that returns free money. And even more so these days.  The current pinball tutorials (and upcoming pinball starter kit) play incredibly well for the new Apple TV, which should not be under-estimated. I would consider that to be your main target market these days. If your app sells a few copies for the iPhone or iPad, that’s just bonus sales. Why? Because right now the new Apple TV store is the ultimate place to be a big fish in a small pond. In December of 2015, a measly 2600 apps were published.  If that sounds like a lot, its really not when you can consider the nearly 2 million in the iOS App Store. Are their pinball apps in the tvOS store now? Yup… 1. So when people search for “pinball”, believe me, your app will come up. Sadly, that just isn’t going to happen in the iOS store. Your app will get found, it just won’t be on the first page of results.

Now can you actually make an app? If you’ve read this far, that’s a good sign you can. If you’ve made an app in the past, even if it was a couple years ago, believe me, it’s easier now. The starter kits I was making for apps just a few years back were neanderthals compared to what’s possible now. Xcode 7 makes it SO easy to layout and even animate within the program itself and combined with our what our starter kits do, its really a no-brainer. And don’t worry if you feel like skipping the pinball tutorials, and just use the starter kit, no one will blame ya.

Last but not least, do you think your app will be good? I know some of you can put check marks beside every bullet point of the production process but hesitate here. You are your harshest critic. You will crumble up that piece of paper, then rip it to shreds, lest someone un-crumble it and see what you were working on. Remember though, there’s a lot of ways to judge the quality of your work, and you might not really be able to until it’s finished, submitted, then forgotten, and nothing more than a daily sales number in iTunes Connect. 1 sale yesterday, 6 sales this week, etc. That’s the beauty and the beast of being an app developer.  Whether your app is great or not, it’s really not up to you to decide. It’s not up to Apple either. You might only discover your app was a success when you realize a year later, it slowly but surely made you $1500. And probably will the next year, and year after, and so on. I’ve said this before,  don’t try to pay for your entire life with your apps, just try to pay for your vacations. But even if you can’t, that shouldn’t be what makes you create something. Or keeps you from creating something.

If you enjoyed the journey, the destination doesn’t matter. To me, that’s what being an app developer is. It’s a journey. Heck it’s an art. Something to feel like I’m moving forward even when I’m just sitting still. Any hobby which doesn’t cost much, and potentially returns money, is a good one.