In the Card and Board Games iOS and tvOS Starter Kit

Events make the world go round, figuratively and literally in the kit. The play of your game will be designed primarily by events, which define what happens, and when. These events will apply to each player during their turn.  You can also define events to run before and after a complete round. A round in the kit is considered complete after each player has had a turn. So if you have three players, once Player 1, 2 and 3 have a turn, that is a round of play. Your game can have as many rounds as it takes to determine a winner. Or a winner might be determined by the best hand after one round. It’s up to you.  Compare some of the bold words above to the circled arrays in the property list below (BoardData.plist) …. 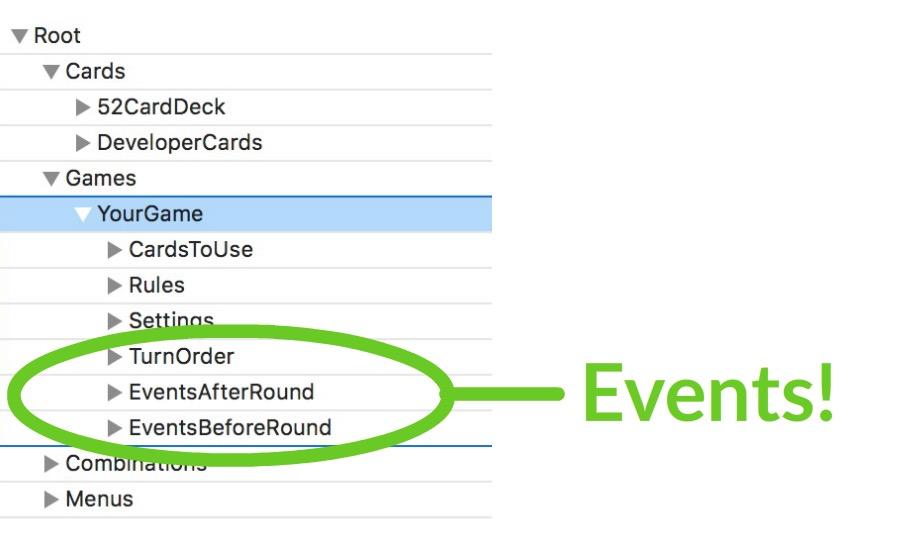 Without getting into the exact key names for these properties yet, lets consider an example round. Keep in mind, events by default are automatically run in the order defined in the array. Between every event you can (and probably want to) add a delay, to give the players time to process what’s occurring. So each event can also include some “wait time”.

Events before the round

This is really the “meat” of your game. The events you run before and after a round might be pretty slim in comparison. Keep in mind, these are just a few examples below…

So that could be a typical “turn order”. And again, remember a turn like this would occur for each player in the game (unless their turn was being skipped as a penalty). When defining a turn order, think cyclically, and set events that would apply to each player, not a specific one.

Events after the round