Justin here. Founder of CartoonSmart and general worker bee. My contribution to the hive (today) is somewhere between revamping the Affiliate program, sending out a newsletter before 5pm and hopefully recording new tutorials today. And yet, here I am about to write what will probably be way too long of an article on well, everything in that title above. I’ll be quick, so forgive my grammar and spelling….

A long time ago…

Strike that. This past weekend…. I got an order from two great students, Jordan and Cody, that had been to the most recent Star Wars Celebration (the one that debuted the trailer and exploded everyone’s heads with our first look at Han Solo in 30 years). Not only had they gone to Celebration, they got an award for best comedy short. Here’s some links of what will hopefully be their first big claim to fame….

“Bounty Buddies” 4 minute Film
Nominees and Acceptance Speech (and proof they won =)
I wanted to highlight their work because I’m proud to say I’ll be their digital instructor one day soon, but also I’m excited to see what they’ll come up with next. See, it’s a lot easier to comb back through CartoonSmart posts then to search my email for two names I might not remember in a year. Sorry it’s true.

So since we are talking about Star Wars….

I was born in 1977, the year Star Wars came out. My first memory was seeing Star Wars in the theater. Wait Justin how could you remember that!? No I wasn’t a Jedi baby. It was a showing of the movie years later at a drive-in theater (I remember being pulled up from my car seat to sit on my cousin’s lap in the passenger side) so I’m guessing I was around 3 or 4. Probably the original Star Wars was being shown again in theaters before The Empire Strikes Back came out.

Point is, I was a Star Wars kid. Even if I didn’t first experience it in 1977, it was “the thing” throughout my childhood.  And that’s never gone away. I still have strong feelings seeing Luke look longingly at the twin suns on Tatooine or when he shuts off his targeting computer during the attack on the Death Star. Like most 70’s and 80’s kids, I wanted to be Luke Skywalker, but it was in high school that I actually felt like Luke. Because I did not want to be there!

If there’s a bright center to the universe, you’re on the planet that it’s farthest from.

High school was my moisture farm on Tatooine. The rock I never thought I would get off of. Even though I liked high school, got good grades, was a popular kid (pats self on back), I always had this impatient feeling that the clock wasn’t ticking fast enough toward what I really wanted to do.  And like Luke, it seemed like there was always another season before I had a chance to join the academy.

My biggest problem was I knew from a young age that all I wanted to be was an artist of some sort and high school never had enough to offer me in that field. If my school could have given me 7 hours a day of art classes, I would have wanted 8. Until my senior year, I was lucky if I got 1 hour a day, which left another 6 hours of classes I could care less about. Math, English, History, all of them were absolutely pointless to me. When Luke says to Yoda on Dagobah “Oh, I don’t even know what I’m doing here! We’re wasting our time!”. That about summed my feeling in every subject, every day. And to this day, I still have high-school-centric dreams where that frustration puts me right back in class again. I also got booted down to remedial math class for falling asleep too often my senior year and I think that, as my one big academic slip up, causes a lot of panic dreams as well (so try not to screw up too bad, you’ll pay for it later)!

Fate is not without a sense of irony. Wait that’s a Matrix quote. Well it’s true. Ironically, I’m a teacher now. And I’m a programmer. Something so geeky, I never would have imagined that for myself. And nowadays, I wish at times I had a paid a little more attention in Math class. But I still think those frustrations were valid because there are hundreds of thousands of kids that decide their career path at an early age and stick with it later. These aren’t kids that decide to be garbage men either. These are driven children they are fascinated by a particular subject, like medicine, like programming, like art. And although the public school system (by and large) probably can’t put kids on highly-career-centric paths for subjects like brain surgery, they can for what CartoonSmart teaches. And even better, if schools can’t provide enough art and programming classes for those impatient kids like me, sites like ours exist to really pour it on after school.

There wasn’t a “CartoonSmart” when I was growing up. There wasn’t really internet. Not like we know it today. Programs like Photoshop, which arrived around 1990 were way off my radar. I was starting high school around 91-92, so that would have been cutting edge tech back then, and good ol’ Chamblee High School in GA, didn’t have it.

Nowadays, every frustrated, I-know-what-want-to-be-when-I-grow-up type kid with a computer can milk our site for every drop of training. And what’s even better, we now offer monthly subscriptions to really make everything available at a low cost.

Now to throw the Star Trek fans a bone. The Enterprise crew had a five year mission. CartoonSmart has a 100 year mission.  That’s how long the domain name is registered for right now. When Network Solutions started offering a 100 year registration, I was in. It was actually quite a few years ago when I did that, but I knew early on, CartoonSmart was my mission. I wanted to do this for as long as I could. And unless I live to be 120-something, I won’t see where the mission ends. Some of you reading this might though.  Well maybe not. This is CartoonSmart’s 11th year in business so we’ve all got a long way till this adventure ends. Or I’ll just renew for another 100 years, and there will be no end in sight!

For all you Luke Skywalker kids out there that want to get on with your lives as early as possible, believe me, there is an end to the phase you’re in, and I recommend enjoying the time you have now to educate yourself and create as much as possible (hopefully at your parent’s expense in the luxury of your rent-free bedroom). The next phase won’t be any easier. So while you can, do things like Jordan and Cody did. Animate a comedy short. Program an app. Become a graphic designer before you graduate high school. Become an affiliate marketer through social media. There’s all these things you can do now, that you might not fully realize because you’re thinking the place you’re stuck in is holding you back.  If you’ve got a computer, nothing is stopping you.

Alright. Back to work. See I rambled on because no one did shut me up or shut me down. 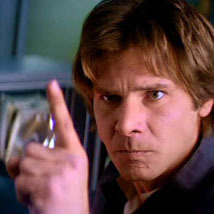