Policeman Robert is a set of cartoon styled character sprite for 2D side scrolling shooter games (metal slug-like). The character art style is perfect for mobile games and highly recomended for indie game developer who developing 2d adventure games. This 2D game character has cool animations that are done in brashmonkey spriter software. 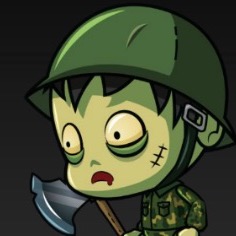 The short version: Accessing art from our site (whether as a member or via a product purchase) grants you a license to use the art for commercial or non-commercial apps / digital media. You can not use the art in print products (sorry, no board games, t-shirts, etc). Although the original artist is the copyright holder, you are granted a license to use the art in your app or game. As long as you keep to the terms of the license, the artist will never make a copyright claim against that usage, nor could any other licensee of the same art package (as they are not the copyright holder). Common sense, right? To read the full version of our art licensing terms, click here.